On November 8, Oregonians cast their ballots in contentious races up and down the ballot, including congressional, gubernatorial, and state legislative campaigns. In 25 of Oregon’s 36 counties, voters also determined the fate of 51 local funding measures. The tax and spending proposals varied across the board, including creating new and reauthorizing existing funding mechanisms. Overall, 36 of 51 (70 percent) local funding measures were approved by voters, suggesting that Oregonians remain willing to open their pocketbooks for services within their communities.

The financial outlook for Oregon’s local jurisdictions varies, sometimes even within a given jurisdiction. While the pandemic significantly strained local revenue sources, the infusion of federal dollars into state and local governments through multiple relief and stimulus packages buoyed local finances. Still, the pandemic and its disruptions, combined with increasing payroll costs due to inflation, add significant stress to a jurisdiction’s ability to maintain current service levels, despite additional funds.

Unlike other localities across the country, Oregon’s jurisdictions are also hamstrung by the state’s lack of a sales tax, which serves as a linchpin funding source for local public services elsewhere. Further complicating local finances are the state’s constitutional property tax limitations. If an individual property reaches its three percent rate compression limit, the county assessor must compress (i.e., reduce) property taxes collected in a specific order, starting with local option levies before turning to permanent rates. Thus, new taxes may never be collected despite the voters approving a new tax to support services from the county, city, or special taxing district. This reality poses a political enigma where voters reasonably expect new services after offering to open their wallets, only for the local jurisdiction to be constitutionally prohibited from collecting the money.

Despite the funding constraints on local option levies, localities did not shy away from asking residents to approve special taxes for new and continued services. In fact, more than half of all the local funding measures on the ballot were option levies directing money to enhance fire departments, libraries, and parks. Oregonians seem willing to pay more for community programs in spite of a worsening economic outlook and historically high inflation. In the last few decades, voters have tended to support local funding measures at a rate of 60 percent. This cycle’s 70 percent rate is notably high.

Although this election was an intermission of sorts from the charged state or regional tax ballot measure fights of previous cycles, Oregon was not without tax controversy on the ballot. There are always interesting policy battles and, sometimes, tea leaves to find in the local ballot measures, no matter how small the jurisdiction. For this election cycle, Josephine County and the City of Ashland win the prize for the most electric and eccentric local tax measures.

Josephine County residents pay the second lowest average property tax rate in the state, behind only neighboring Curry County, at less than half the rate of Portland area counties. In the 2010s, as federal support for rural timber counties shored up, Josephine County and other low-tax jurisdictions struggled to find the resources to maintain essential services, including staffing their jail and deputies across the county. Since voters had grown accustomed to the county making ends meet without new or higher taxes, the anti-tax spirit and resentment towards government only deepened. After five proposals failed, voters eventually approved a barebones local option levy to reopen the jail and rehire deputies in an off-cycle election in 2017.

The property tax levy that services Josephine County’s law enforcement is set to expire after the current tax year, leaving an uncertain future for the Sheriff and his deputies. County officials initially sought a renewal of the 2017 levy to maintain services. However, after several community meetings, it became clear that residents did not want to raise their property taxes again. Although renewing the property tax levy was the most straightforward and reliable means to raise government funds, the Sheriff and county commission returned with a new proposal—a seasonal sales tax targeting times of the year most likely for tourists.

The sales tax, called the “retail activities tax,” was a creature of creative political thinking. Officials understood the resentment towards higher property taxes was strong, but so was the disdain for new and convoluted taxes. According to contacts in the area, the local strategy was to present a counter proposal so outlandish that residents would accept the property tax increase as the better solution. However, the problem with that strategy was that “taxing the tourist” became a rallying cry for supporters, and they ultimately bought into their own rhetoric.

Sales taxes are a powerful revenue instrument because they apply to a broad base and raise substantial sums of funds at a low rate while maintaining simple administration and compliance. Josephine County’s proposal defied all the policy principles that make sales taxes a tenet of local funding streams—an artificially narrow base (sales under $2,000) and a seasonal timeframe that lasted only from April 15 to October 15. Most importantly, the proposal would be a nightmare for business compliance as sales tax software vendors would be unlikely to service such a small jurisdiction with a unique tax. Despite all the technologies available to simplify business processes, Josephine County businesses would likely have no choice but to turn to pen and paper or, at best, a spreadsheet to track sales tax remittances.

Ultimately, Josephine County voters rejected the unusual sales tax proposal, rather resoundingly, too. With only 17.5 percent of voters supporting the tax, the county is again sent back to the drawing board to find another solution to fund public safety. As Oregon’s local jurisdictions seek new funding mechanisms to support essential and expanded services, they should look to Josephine County as a case study of how not to create a new revenue stream. Wheels are great, let’s not reinvent them.

In Ashland, the City Manager and Ashland Parks and Recreation Commission have been in a unusual brawl over the management of parks staff and resources as well as the tax used to pay for them. During the 2020 election, Ashland residents amended the city charter to change from a mayor-led to a manager-led form of government. As part of the charter change, Ashland’s city manager is now responsible for all city staff and personnel. Soon after, however, it became clear the new managerial powers were in conflict with the independent district managing park properties and a special tax collected to finance park improvements as well as special infrastructure projects.

Besides the City of Portland, Ashland is the only other local jurisdiction grandfathered into a state preemption against local gross receipts taxes. Ashland’s tax, the food and beverage tax, is levied at a rate of five percent of gross revenue from the sales of food and beverages from restaurants and other types of prepared food. The city collects the tax for the independent district, raising roughly $3 million annually to support park programs and maintenance.

One of the first major actions by the new city manager was to encourage the city council to refer two ordinances to voters drastically reshaping the roles and responsibilities of the parks district. Measure 15-210 reorganized staff under the leadership of the city manager while maintaining the park district’s control over the properties. Measure 15-211 redirected 73 percent of the food and beverage tax funds to the city’s general fund for public safety and other essential services. Coincidentally, or perhaps not, Ashland is experiencing a $3 million budget shortfall and the city manager is proposing cuts unless the city secures additional funds.

Ashland voters strongly rejected the measures from the city manager by more than 20 percent and the city will need to find other means to shore up its budget hole. Admittedly, Ashland’s drama over its parks department and funding is one of those episodes that few outside of politics can appreciate. It is hardly significant in the grand scheme of Oregon’s tax landscape. However, it is also a microcosm of times to come. If Oregon is entering a time of budget uncertainty while already maximizing its rational capacity to tax residents and businesses, those seeking new funds should tread lightly and avoid the auspices of a power grab.

The legislature is gearing up to tackle some of its most daunting challenges, including housing and semiconductors, in only a matter of weeks.
January 28, 2023
3 min read
Dec
09

“The sharp rise in interest rates is akin to taking one’s foot off the gas and slamming on the brakes,” said the economists with Oregon’s Office of Economic Analysis.
November 16, 2022
3 min read
Nov
11 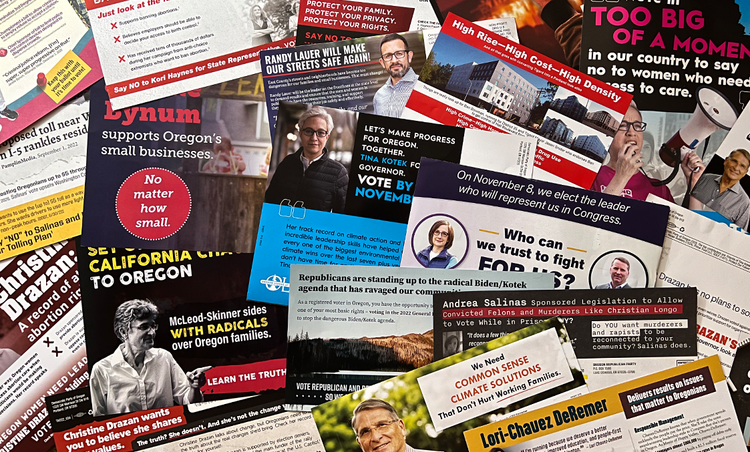